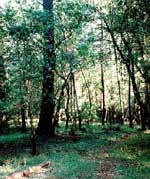 The meeting was called to order at 7:00 PM by President Nick Corsano.

The January 11th 2009 and December 9th 2008 meeting minutes were approved without changes.

A motion was moved and seconded that we confirm Jeff Lanam to head the Junior Grant Committee. The motion passed. Voting was conducted by email.

We have filed the re-charter paperwork and fees with USOF, which cover us for one year.

We received a favorable response from NASA to our proposal to map and hold an orienteering event at Moffett Field. We hope to hold an event at the end of June.

The non-profit and incorporation paperwork will go out shortly for legal review. Nick expects to wrap it up in the next month. When we are 501c3, contributions to club will be tax-deductible.

A Journalism graduate student contacted Nick regarding trail use and competing interests. He gave an interview and was video-taped.

We have recruited new course setters for some upcoming events.

He asked if it would create a conflict if China Camp and Mt. Pinos were held the same weekend. Attendees said that would be a problem.

He asked if the Club Champs could be held at Tahoe in August. People thought that would be okay if it was a two-day event.

Alex is generating discussion on the BayONet regarding orienteering issues.

Park use permits have dramatically increased in cost.

The JWOC task force held their first meeting in February. Gavin Wyatt-Mair, Gary Kraght, Ben Legg, Nancy Lindeman, and Nick Corsano were there. They are focusing on maps, money, manpower/womanpower, and marketing.

They set up a Yahoo! group and advertised it locally and on the USOF club list. The group now has about 25 members, including some from other parts of the country and junior orienteers.

Bob Cooley suggests holding a test meet this summer on USGS maps to see if we are able to get permission from land managers to use land north of Truckee. A discussion followed about the difficulty obtaining permission to use lands in the Tahoe area.

They will hold an open committee meeting at Boggs Mountain, Saturday evening, before the potluck.

USOF will be hiring an Executive Director soon. The committee hopes to find out what he/she can do for this effort.

These increases are to pay for the new USOF Executive Director.

The possible donation of funds to the Trail-O team brought up the need for a policy on donations, as opposed to grants.

Dan suggests bringing donation suggestions to the board for recommendation. Each case would be unique, so there wouldn’t be a form needed.

A committee could screen donation requests and present the case to the board.

Would we have a budget for donations? How pro-active do we want to be?

Such a committee would have made it possible to donate to coaches without changing the junior grant program.

Contributions need to be consistent with goals of club- such as within the orienteering community.

It was mentioned that if the contributions are sponsorships, we will have more leeway.

We need to be careful to follow the intent of any donations we accept.

A motion was moved and seconded to authorize the formation of a general donation committee whose purpose is to evaluate general donations by BAOC and recommend them to the board. Motion passes.

Ben Legg is interested in increasing the Red Bluff Map.

Bob Cooley has had a basemap made for Granite Bay, and GCO is looking for a field checker.

Do we want to buy Rex’s maps, if that option is available?

A motion was moved and seconded that the club give permission to Dan Felitsky of SDO to reprint articles from our bulletin in the newsletter of SDO and a USOF/COF repository, including the wording that the article is reprinted by permission of BAOC and the author.

It was moved and seconded that we amend the motion to include articles and photographs in the permission.

It was moved and seconded that we amend the motion and add a provision to publish photographs with permission of the photographer. The amendment passed.

We need to request that Meg Gerstner send text for the permission clause.

The Sprint Finals is a grassroots movement outside of USOF. Every year the sprinters have an unofficial series end championship. Rex and George would like to host the sprint champs the weekend after the Pacheco Pass A-meet in November.

They will work with BAOC to make an event a little bigger than A-meet plus sprint finals by holding orienteering events throughout the week. The sprint champs will share resources, registration, marketing and event planning with the A-meet. They will also hold recreational events with the sprint finals, and schedule them so people can watch sprint finals and still participate in a recreational course. It will be a nine-day festival.

A motion was moved and seconded that BAOC negotiate with terraloco for the production of a series of orienteering events in November. The motion passed. RexWinterbottom recused himself from voting.

13. Guidelines on Use of Club Equipment – Jay Hann

Jay Hann suggested that we need a policy on lending club equipment to scout masters, teachers, etc. Mark Blair says policy-oriented questions on equipment usage have never come up. He sees no need for an official policy, but is okay with codifying the unofficial policy if the board sees a need.

The unofficial policy is that for any usage of equipment or segment of equipment, any event or activity needs to be sufficiently orienteering related, and avoid equipment usage conflict with any other club events. In this case, the primary custodian does not need to consult anyone else for permission to lend the equipment.

Jay Hann pointed out that we have never before lent the equipment to anyone without a club member being there. He wants to get more kids involved in orienteering, and we need more people involved than just club members. Nick suggested Mark write down the policy.

The club held five days of ski orienteering in Tahoe this year, and one day in Bear Valley. Tony Pinkham made awards and magnet for attendees of all events.

For next year, they are negotiating inexpensive lodging and two days of events at Bear Valley. They are also working on lodging in Tahoe to attract more attendees from Canada and the East Coast.

Burton Creek/Tahoe Cross Country is planning to use snow mobiles next year to add trails to make the Ski-O event more similar to international ski-o events.

He has ordered 20 more blue controls, which will take 4-6 weeks to arrive and may not arrive before the A-meet.

Mark Blair has been working hard on his EPunch registration software, which has now been used nine times. Having this reduces the stress level on EPunch volunteers.

Nancy wants to see the club post event information on the website sooner so that when she sends out publicity, people can get additional information from the website. It is the Event Director’s responsibility to post info on the webpage as soon as possible.

Toby Ferguson attended the adventure race open house, and our events are listed on the Bay Area Adventure race and Dirty Avocados website.

There weren’t any event write-ups in the last bulletin, so nobody knows who helped, their opinion of courses, the weather… All we know is who won. He reminds us that the job isn’t over until the paper work is done, including write up of the event.

Judy Koehler is writing more articles on permanent courses for the bulletin.

Rex Winterbottom’s training event at Fleet Feet is next week. It would be great if some club members could attend.

Kelly joined the Santa Clara County search and rescue to be of help at Boggs Mountain. He has been talking about land nav with other members so some of them may attend our events.

He is talking with Ben Legg about recruiting volunteers.

Kelly sends a welcome message to new members via email.

Scott Aster appreciates having food at events. Kelly Wells will send an updated roster to Rex to identify volunteers to handle food.

He has done some youth outreach, but otherwise it has been very quiet.

All three regional equipment sets now have enough EP-compatible bags to sustain a B-meet. Only the EPunch units need to be passed around now.

He has abandoned the idea of a central storage locker for equipment.

The second COOL season has finished. There were more participants this year than last year. He is working on "lessons learned" and will apply for another grant to offset equipment purchases.

A week from today is the Science Fun Fair at the Alameda County Fairgrounds, and Jay is setting up a small orienteering event. He would appreciate volunteers.

COOL has a great shot at winning the club Varsity competition

Dan has responded to some questions from new course setters.

Regarding the comments in the sanctioning newsletter about the BAOC varying of course lengths, some East Coast runners think our courses are a little too short for 100-point runners, but we are worried about the 50-point runners finishing within the time limit.

The BAOC Web site is doing well. Brad and Chuck continue to be a great help in keeping the Web site up-to-date, and thanks to them I can focus on the technical aspects of the site's support and maintenance. Other club members have gotten into the act as well, adding pages or updating information, and for everyone's efforts I am grateful.

The BAOC Annual General Meeting will be at 1:30 PM, April 19th at Sunol.

The tentative next board meeting date is June 9th, 2009.

The meeting was adjourned at 9:59 PM.