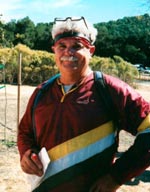 Minutes of the June 19, 2006 meeting of the BAOC Board of Directors

In the absence of the Secretary, Scott Aster recorded minutes.

The meeting was called to order in the Burgess Recreation Center in Menlo Park at 7:00 PM by President Nick Corsano.

Nick welcomed the new board members, Kelly Wells as Membership, and Jay Hann as Juniors. Nick also emphasized the need to work on increasing our club's membership, which has been dropping slightly now for several years. A discussion was brought up on ways to develop and add value to membership.

Nick mentioned that we still have several vacancies on the board, and that he will appoint someone to work as a liaison with Joe Scarborough for coordinating the ordering of club uniforms. Nick also presented the annual club service award to Scott Aster.

Nick mentioned that Brad will now handle insurance for meets. Nick also said that the EC will work with the individual EDs on obtaining park permits for individual events. The idea is that EDs should attempt to get the permit on their own, but should contact Brad or the regional ECs if they need help. Mark Blair emphasized that it is imperative that EDs get the permits early in the process. UC Berkeley and Calero events have been added to the schedule. Kelly Wells mentioned that he feels A-meet directors need more aid and guidance than they have been receiving.

George reported that event income was good so far, even though we had not yet held as many events as in past years. While total income is down, total expenses are down as well.

Bob said that our mapper at Boggs Mt., Vladimir Zherdov, is working on it now and that it should be ready for a meet in 2007. The Tilden map is ready to go, and we are trying to get permission to map Knowland Park. A discussion broke out and it was decided that we would hold an A meet at Boggs Mt. in either the Summer or Fall of 2007. Scott Aster volunteered to be the ED, and George Minarik volunteered to set courses.

Trinka discussed the pros and cons of using e-punch for White and Yellow courses. Concerns were raised about the added work for the course setter,and the higher probability of lost e-punch sticks. A heated discussion broke out regarding how much to charge people who lose their rental e-sticks. After much discussion, the board voted 11-1-0 to change the replacement charge to $25.00.

Rex said things were looking good as far as preparation was concerned. Rex is looking into finding social activities for Friday and Saturday night. Possibilities discussed were a barbecue at the campground or going to a buffet at one of the casinos. Strong support was expressed by the board for ice cream socials.

O in the Oaks IV – Event Director not present

Report given by Nick: Mentioned main concern over parking. Ideas of carpooling from Livermore, using the Wal-Mart parking lot, and renting a shuttle bus were discussed. Mark Blair said he knew someone who lives on Morgan Territory road, and he would talk to them about the possibility of event parking on their property.

Tony reported that plans were well along for a multi-day festival of Ski-O to include the U.S. Ski Orienteering Championships. Tony mentioned that he had not yet heard if we had been granted the Ski-O Champs yet. A lively discussion broke out disparaging east coast snow conditions, and several board members urged Tony to simply declare that we were hosting the U.S. Championships. Tony said that one thing still needed was to set up online registration.

Nick told the board that he had a "vision" for a B-level meet with training both in the field and using classrooms, as well as a big BBQ social. This would encourage both training opportunities and socializing, two facets many board members felt are lacking in the club. It was mentioned that Indian Valley might be a good location to try this at.

Nick reported that Penny DeMoss will head this. Route gadget will be used to vote on courses. This may be combined with the O-Fair event. The board debated various criteria for the competition, suggesting using both armchair design along with actual course evaluations.

They want to, whenever possible, coordinate the registration table with the e-punch table to make the whole process easier and quicker. They also mentioned they would now be updating the registration form to reflect the change in rental e-stick replacement. They mentioned that people hanging around registration early hinders the setup and smooth functioning of the registration team. It was suggested that beginner clinics begin at 9 AM instead of 9:30 AM to try to change this situation. They also advocated including e-punch instruction in all clinics.

Mark announced that he will soon be purchasing a large (within budget) quantity of control bags from the Ukraine.

Trinka announced plans to purchase 30 additional e-punch units. She also thanked LAOC for lending control units for the Joe Grant meet, and she thanked Harold & Penny for fixing the tent.

Kelly announced that the transition was going smoothly.

Jay said he plans to work with teachers, JROTC, Boy & Girl Scout units, and Home School groups to encourage greater turnout of juniors to our events. He mentioned the Association of Physical Education teachers is a group he wants to work with. Jay also asked that we emphasize juniors more prominently on the web page.

Scott mentioned that there had been two team-building events held recently that were well received, and which paid the people putting them on. Scott also mentioned how rewarding it was to take beautiful female adventure racers out for one-on-one training. His comments brought much laughter to the room.

Jeff requested more articles and photos from club members. He also mentioned that new board members can have baoc e-mail address for their positions if they like. Jeff wants to insert map symbol descriptions in the bulletin, but is not sure when he will do this.

Nancy announced plans to publicize NOD, the Ski-O championships, the O in the Oaks event, and the upcoming Rogaine.

Rex reported that the Halloween social went very well. He reported that the picnics he has organized at several events have gone well, but that it would work better if he can assign people to be in charge. Rex is setting up training events at nonstandard locations around the bay. He says for these he needs to check on park rules, and the need for permits. He says he is thinking about a movie night, or a miniature golf excursion.

Nick says that Terry wants to organize a couple of trail-maintenance day events and would like suggestions of good parks to do this at.

Nick wants there to be a more prominent web page notice of previous service award recipients.