How Vladimir calculated Goat climb: "I tend to favor straighter routes than most of you, and runners stronger and faster than I favor even straighter routes. Hence, e.g., the 25-m climb on 14 to 15, which Kent probably got without any climb." - Vladimir
Writeup by Jeff Lanam, Meet Director, and Vladimir Gusiatnikov, Course Setter
Skip to the results

Despite worries of another rainout, clear, cold skies looked down on Almaden Quicksilver County Park for the eighth running of the Golden Goat. In addition to the Goat and Kid courses, we had a good turnout for White and Yellow as well. We even had a large group from Fresno State make the trip.

With many of the club stalwarts out on the course, I especially appreciated those who volunteered. Vladimir placed most of the controls; assistant director Carl Reisinger arranged for the portable toilet, ran the start all day and pitched in wherever needed. Penny DeMoss designed the T-shirts and worked with the printer. Stephanie and Rory Maclean, and Chuck Spalding handled the finish. Ev and Jean Beuerman ran registration. Dan Green did both beginner and an intermediate clinic. Diane Hall, Roberta Pilsenbarger, and their Girl Scouts handled the results. Andrejus Masalkovas, Steve Haas, Wyatt Riley, Jim Waite, and Van Boughner helped Vladimir and I with control pickup. Bob Cooley printed the maps and put the Goat bedsheets in the map cases. Alan LaVergne secured the permit. I also want to acknowledge Frank Weiland of Santa Clara Parks and Rec. There were others who helped; I didn't remember everyone, please let me know who you are.

Here is Vladimir's play-by-play of the Goat competition (see map):

The leg to the first control presented an opportunity to plan the skips, the fork, and the window order. The runners spent at least two minutes running on a road, during which time most made their selections for the race. The 16-contour "sprint" to the control was won by Thiago Ghilardi in 3:50. A number of runners were right behind; Syd Reader was fourth at the control. Wyatt Riley, now an East-Coaster and visiting the Bay Area for the Goat, among other things, was more than half a minute back. Many experienced club members took the time to plan, and arrived at the first control later yet.

There were three choice for the second control: to go 23 contours straight up and suffer oxygen deprivation for 8--10 minutes, but then to run a road, and to approach the control from above and with distinct attack points; or, to drop 4 contours down and take a gradual climb, mostly on trails, but then to approach the control from below, going through/around some thickets of PO; or, to skip the control altogether. The second option was faster than the first one, but also the hardest to execute. Syd and his train chose this option and lost a minute or two near the control, and Wyatt and his train, who bravely undertook the straight-up route, caught up. 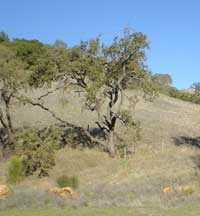 Control 3 was one of my favorites to skip. I estimated that going 2 to 4 saved about 4 minutes compared to 2--3--4. I was worried a bit about much unmapped PO around Control 3, but nobody seemed to get stuck in that particular place. Several experienced orienteers opted to skip Control 2, Control 3, or both. Doing so saved no distance but rather the necessity to thrash through the PO-infested woods of the northern slope of the Capitancillos Ridge. In particular, going from 1 straight to 4 allowed for a long, uninterrupted run on top of the Ridge, with a promise to catch up with the lead pack by the time they got to #4. Skipping 2 and 3 saved about 7.5 minutes at the lead-train speed, compared to the course without any skips, according to my pre- and post-race estimates.

It was at Control 4 that Mike Prindiville, a former Stanford track star, made a key decision. He had been following Syd for the beginning of the race, but then Wyatt came along, and Mike noticed that Syd seemed to go straighter than Wyatt, and was also getting stuck more than Wyatt. Since Wyatt and Syd were making the same progress at the time, Mike decided to stick with Wyatt. Syd, on the other hand, decided to skip Controls 5 and 6. Those were in the prettiest part of the map, and the skip, while looking obvious on the map, only saved about 7.5 minutes at the "top" speed.

The obvious fork to take was 7A. While 7B was 330m shorter, it also dipped very deeply into the ravine, resulting in about 5 more contours to climb to get to Control 8 in the combination 6--7B--8, compared to the combination 6--7A--8. Ian Tidswell made the best of 7B, using Hicks Road for his way to Control 8. This was the only way to avoid impenetrable thickets on the south-facing hillside, but the route along the road did not bail out of the extra climb.

My preferred skip of the race was Controls 8 and 9. I test-ran 8--9--10, and each of those legs came out at just under 5 minutes. Control 8 was also about 1.5 minutes more running from Control 7A than either Control 9 or Control 10. Therefore, the savings, at lead-speed, of skipping 8 and 9 came out at 11.5 minutes, the best advantage I could come up with. The second-best skip was therefore Controls 3 and 8: 4 minutes for #3 and 6.5 for #8, for a total of 10.5 minutes. Control 8 in combination with either #1 or #15 gave a 10-minute advantage. However, if one's navigational skills were not quite up to par for the challenges of #2 and/or #3, then the 2, 3-skip was probably the best.

I arrived at Control 10 (Control 6 of the Kid) at about an hour into the race, to spectate. Far in the distance I could see the hopeful Goats dropping the hillside to Control 8 (Kid 4); I could see them climb up from Control 9 (Kid 5); and, across the valley, I could hear talking and laughing from the road that led along the ridge from Control 7A.

The first at the control was Hannu Haarma, the leader of the Kid. But just as he was about to punch, Wyatt and Mike appeared from above, leading the Goat. Wyatt was relieved to hear that Syd was not in sight. Mike appeared to be hanging on to Wyatt tightly.

In about 2.5 minutes, Syd and Thiago huffed and puffed the way up from Control 9. Syd did not appear to be in great spirits, and took some time to drink; Wyatt had made the better skip, and Syd now knew it. After those two, a long gap; finally, Doug Stein comes in fifth, over 10 minutes behind Wyatt. Matthias Kohler came next, and Rex Winterbottom was right behind him. Thorsten Graeve, Brian Moore, and Kent Öhlund rounded up the top 10.

I then moved to Control 14 (Kid 7) to watch more of the race. The 12, 13-skip, although somewhat enticing, was only a 8-minute win, or so. Jim was the only one of the top 10 who opted for it. Therefore, I was much surprised to see a near-complete reshuffling of the Goat standings at Control 14! Wyatt and Mike had already moved through, presumably out of reach. But Syd was just coming in, third position, having apparently lost to the tune of 9 minutes at Control 13 due in part to some unmapped green. Matthias Kohler was now in fourth and did not realize that it was Syd right in front! Thiago came fifth, right after Matthias, and Jim was sixth, thanks to the skip. Doug and Rex were not to be seen, also victims to the same green.

In the end, Wyatt and Mike finished first and second in 102 minutes; some 16 minutes ahead of Syd and 3 minutes better than my predicted winning time. Matthias held on to fourth. Penny DeMoss was the top woman. Hannu won the Kid in 96 minutes.