Nisene Marks has a reputation for gobbling people alive. That's right. One by one, orienteers bravely embark on an exhausting journey through prehistoric redwoods. Dim streaks of sunlight trickle through the canopy as the hardy adventurers crawl up the steep, needle-carpeted hills and disappear into the ferns and moss, only to never be seen again. A mysterious force transports them through a warp of time and space and spits them out, puzzled and disoriented. There's nothing around but seemingly endless, towering redwoods... holding a clue to their whereabouts, but never eager to reveal it. After days of wandering, the poor souls stumble upon a road, hungry and tired... the adventure is over, and the forest is victorious yet again.

With few exaggerations, this is a yearly scene at BAOC events at Nisene Marks. This one is from Tony Pinkham, August of 1996:

Many of the DNFs were for participants not prepared for the difficulty of their courses. Many of them chose to advance to a more challenging level at this event and found the navigational difficulties too overwhelming. I believe their biggest problem is that we don't currently train advanced beginners and intermediates for their advancement. We've tried a number of things with minimal results...

Dennis Wildfogel headed up the field on the Brown course, with perhaps the best relative winning time on any course, though Dennis pointed out that his time was more than 20 min/km which is usually not sufficient to win an advanced course—but Nisene Marks is not a usual venue.

So, what is it exactly that makes Nisene Marks so special? My understanding is that in addition to the physical demands, it is the structure of the terrain, and the high cost of relocation that is incurred if one's navigation skills aren't quite matched with the forest.

As far as the physical demands, Nisene Marks is indeed steep. I estimated the average slope grade for the area to be about 0.53. For comparison, the river escarpment at Eschenberg, the most likely site of the 2003 World Orienteering Championship Long Final race, carries an about 0.45 grade. Nisene Marks is steep but not so much as to be in a class of its own.

But the navigational challenge does not stem from this steepness. The first part of the one-two punch comes from the low visibility and the vague nature of the forest. There may be no features to go by for a long while as one contours around a slope; the problem becomes harder if it involves climbing or descending a slope at an angle. When they do come in view, features, apart from the major stream valleys, are always indistinct and require a high ablility to match the degree of slope steepness and the particular shape of reentrants and spurs to the generalized contour detail on the map.

The forest can really unleash misery on the unsuspecting navigator. The deeply-eroded slopes are, on average, 150 meters high or so. If one is lost in the middle of one (and the controls were mostly placed not too close to ridge tops or major streams), it is many meters to climb up or to go down to relocate, and that comes with no guarantees. Try this twice, and you'll feel like you are done for the day.

So, what suggestions do I have on how to improve the chances against the redwood monsters? I believe the terrain places a very high premium not so much on keeping contact with the map, but on keeping exact track of your elevation changes. That is, count them contours! This is not very glamorous mental work, but it will get you there most of the way. The terrain also does not yield itself to the "proactive" runner, in the sense of my discussion with James of last November. You've got to be very watchful and extract the maximum information from anything you see that may be mapped. Mind the subtle slope changes in particular, but make sure the basics are taken care of—identify and match every single reentrant, and if some do not quite make sense, work with the map until they do. You can't plan on hitting things ahead of you; you won't see them, you'll have to go that extra contour and a half to get around deadfall, and by then, your plan is not working.

So, yes, this is my understanding of why there were so many DNFs. This, and the Superbowl.

For the 2003 event, I chose the northernmost reaches of the park, not visited by orienteers since 1987: the inaugural use of the map, the 1987 US Relay Champs. Not suprisingly, two challenges arose. One was the logistics of reaching the NW entrance to the park. A parking lot is yet to be built by the state, and the priority given to the park is apparent from two items: first, there is no general plan for the park as of yet, and second, the park finally got a full-time ranger during the week after our O-event.

After a delay caused by late-coming USOF insurance, a site for parking was found, some 3 miles away from the map. Once the start and finish locations were chosen, the courses came together pretty quickly. I had to shorten the courses multiple times, before and after test-running. Long legs with route choice could not be accommodated by Green or Brown, and there were only a couple on Blue and Red. However, I had a pretty good confidence that the Blue could be completed, error-free, in just under 80 minutes by the best BAOCer. Red seemed a bit long.

The second challenge was presented by a cluster of private properties on the map. The existence of these was unknown to me until the week before the event. They did not show on any park maps. The area covered by the houses was small, yet right in the middle of the beginner and intermediate courses, and the property owners insisted that the actual private area was much larger than just their lots, and asked us to stay away. One of the owners admitted to taking down some of our course in 2002. But otherwise, he seemed like a reasonable guy.

Nisene Marks is not in OCAD, so the courses had to be hand-drawn on the maps. The week before the event, my sister did the work. She commented that she did not find Green particularly exciting, the way it looked on the map. However, I thought it would be the course the locals would appreciate the most. Jim Waite helped with getting equipment to the park, and several shuttle drivers were found. 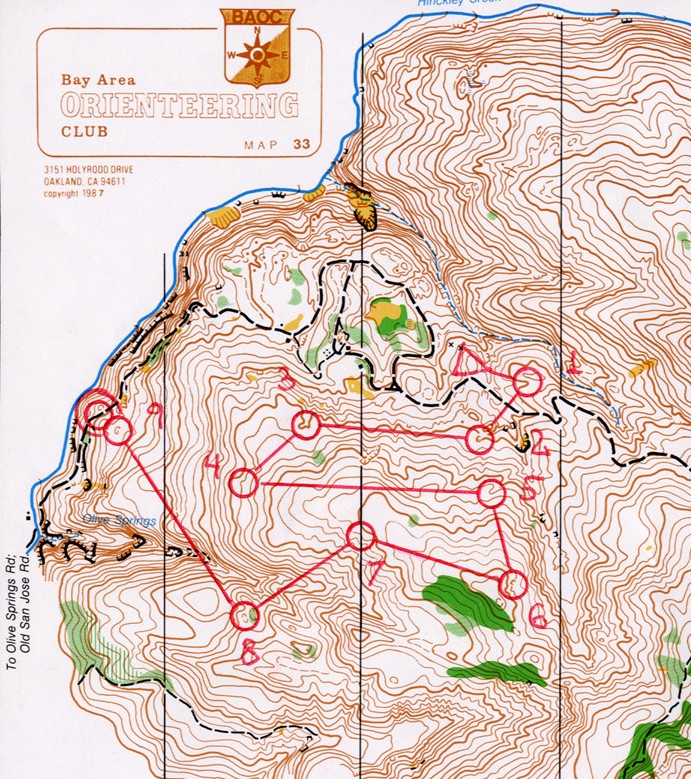 On the event day, the first starters did not get up to the start until well after 10 am, owing to the shuttle drive and the long walk. And most wanted to be finished by 1 pm or so, to have ample time to get back before the game.

Things seemed to be running well until the angry property owner showed up. He mentioned the people running through "his" backyard, but the real reason for his fury was the boat. He kept a boat in Soquel Creek, and as orienteers were coming up to the start, someone thought it was a good idea to use the boat to get across the creek. Others followed. I had warned the owner that up to 200 people would be using the park on the day, and he should not have left the boat on a public road. But I was also surprised that the competitors would be using property for which we did not have permission and which was not advertised in event notes.

With few exceptions, people on the advanced courses took considerably longer to complete the courses than my predicted winning times. One set of remarkable performances of the day was on the Green course, where Anja Mo Berge, visiting from Trondheim, Norway, finished in just over one hour. It is polar night now in Trondheim! In second was Katrin Lorenz, a new club member from Germany. And in third, in 67 minutes, was BAOC legend George Minarik. The three top Green finishers successfully navigated the steep hillside and the unmapped triassic vegetation on the last leg.

The other set of remarkable times was shown by Scott Bower, Thomas Bastis, and Mark Irwin on the Orange course. After winning it, the trio of relative newcomers headed for their second course of the day, a Brown, and turned out another set of respectable times. The course, however, was won by Penny DeMoss, who got injured right after her start on Blue, but came back and did the Brown.

On Orange and the advanced courses, the number of finishers (counting groups as a single entry) was 31, for 64 starters. For comparison, in 1998, there were 31 finishers for 61 starters. 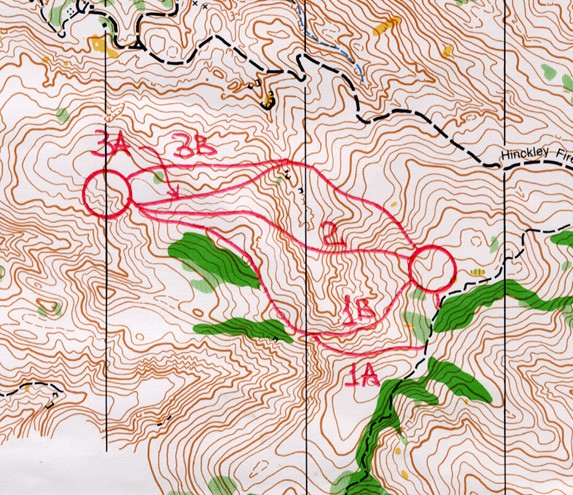 The longest leg on Red and Blue presented several choices. Of the few runners on the two courses, the best time was shown by Tapio Karras on route 1B.

Great big thanks to: