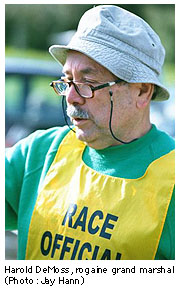 Thanks to all who came out for the meet. The weather was perfect. All 60 of the controls were visited, but no one team visited them all. The team with the most points, which went to 50 controls, was the winning men's 6-hour team. Of a possible 1740 points, they racked up 1500. Very impressive. Of the 45 teams, 22 chose to do the 4-hour, and 23 did the 6-hour. Only a handful of teams were late, mostly only a part of one minute. Amazing.

I've gone over every control card with a magnifying glass, found all faint 'dimples,' checked against the master, rechecked the math, and below are the final results for the 4-hour and 6-hour rogaines. Most teams will notice that they actually had more points than on the preliminary results at the meet.

I was going to include what controls each team went to, but 'argh'...that got old real fast. So, anyone who wants to know which controls any particular team went to can e-mail me and I'll give them to you. I don't know which order they were visited, though.

The grand plan was to have a rogaine that would test people a bit more mentally, instead of it just being an endurance race. The Briones map is not terribly technical, but you certainly have to pay attention. Four and six hours is not long in rogaine terms, in fact I guess it barely qualifies, but we wondered if people would actually want to have to think for even that long. From the feedback, it sounds like it was enjoyed by most.

When deciding the point values for the controls, I took a number of factors into consideration. I wanted people who didn't have as much range to have the chance to get some high pointers, and certainly, if you had to hike up a steep hill, evading poison oak (or not) all the while, you should be rewarded proportionally. Also, I thought that if enough high pointers were close in, a team could concentrate on the southern half of the map and get enough points to win their division without going onto the northern part at all (I was right). In order for a team to get all 60 controls, they would have had to pick up a control every 6 minutes for the entire 6 hrs. We felt pretty sure no one would pull that off. Every control was visited by some team, but no team got every one. 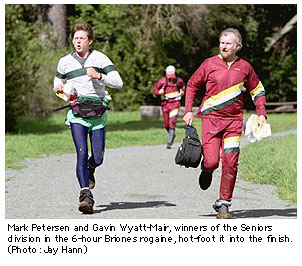 Although we did spend many more hours planning this meet than normal, it was actually much more enjoyable. We spent many hours hiking around in those beautiful hills mapping, vetting locations, and putting out and picking up controls. As opposed to sitting at my desk trying to figure out how to send people on 7 different courses.....getting the distances right, the proper percentage of climb (really, I do try to get that right), then finding people to help on the day with starts, finishes, e-punch, beginners clinics, etc. You get the picture. Given the time, which sounds more fun to plan to you?

I guess the best way to be sure it doesn't rain is to be totally prepared for it. We were ready, rain or shine, but let's face it, the perfect weather had much to do with everyone's enjoyment of the meet. We set up the tents and waited for people to arrive. Thanks very much to everyone for getting there early as requested. We know many of you had to travel a long distance and we were very impressed that everyone was ready to go by the time we shut down registration at 8:45.

After the 9:00 am mass start, we had a cup of coffee, read the Sunday paper, got to know Neal (Shirley Parlan's friend), made up a list of who was in each category and pondered why, when given 4 categories from which to choose one, some people chose none, some people checked the wrong one, some checked two, and some wrote in a category that did not exist......why, oh why? Then I took the binoculars and hiked up to a high spot and watched some of the teams' progress. I only saw one team being a bit too liberal with the 'together' rule. Upon my return, we practiced a system for the finish.....Neal's a quick learner and a really good sport for helping out.

First and foremost, we want to thank Evan Custer for helping produce the map you used for this event. We field-checked a fairly large area between the two existing maps, and Evan entered the info onto the OCAD base map. This is not done quickly. I sat there and watched him do just a few last-minute changes, and I'll tell you, it's not that easy. Especially with someone hanging over you saying "no, the fight is shaped like THIS, not like THAT!" And then, even though he didn't have time to do it, he printed all those maps. What is that saying, "If you want something done, give it to a busy person?" We REALLY appreciated Evan's help. Thanks again. (Right in the middle of this he asked us to be assistant meet directors at Burton Creek......what could we say?!) We had figured in a break in the mapping phase, so that Harold could have elective foot surgery. What we hadn't planned on was Harold having to have his guts remapped...so we ran out of time and didn't finish mapping the white area around controls 50 and 56. We did walk all the trails to be sure they went through, though.

Thanks very much also to the following people who helped out: East Bay Regional Parks and Briones ranger Doug, who drove us out with all those jugs of water. Doug Masiel, who fetched in the remains of the water stop plus a few controls even though he'd run. David Barr, Jeff Lanam, and Joan Roos, who came out to help pick up. And Shirley Parlan's friend, Neal, was an enormous help with the finish...he has excellent math skills!