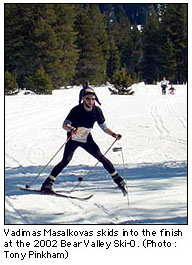 As with all the BAOC ski-O events this year, the weather and ski racing conditions were great at Bear Valley. As happened at Royal Gorge a month earlier, the sunny weather brought a record-breaking crowd (54 participants) to the event. Below are the complete results, and be sure to check out the final standings for the 2002 California Ski-O Champs.

Although we hadn't had many storms in the last two months, we had plenty of snow and all trails were open. Unfortunately, our bushwhacked trails were barely noticeable in some of the iced drifts that we had difficulty breaking through. Trail conditions varied, but they were definitely good for racing, and it showed on the faces of our participants when they finished.

The original map was the result of a tremendous effort by Mike Poulsen six years ago. Given the quick work that Mike had to do on the map (he field-checked it in the two months before the first event in 1997), it had some problems that he and a number of others, including myself, tried to correct over the years from our observations on the ski trails. We were able to nail down the mapping in the meadow area where we had known benchmarks (reservoir, runway, and trail head) but where the trails ventured away from the benchmarks, we had problems that we could never resolve to our full satisfaction. Neil Hunt, however, did the same thing that Brenda Giese did at Burton Creek: He used GPS to plot the true positions of the trails. The GPS plotting wasn't perfect (there were some errors), but we incorporated what made sense with our field observations. For once, I felt very comfortable with the route choices offered to our participants. Now that the trails are appropriately mapped, we can put in the effort to increase the contour resolution from 40 to 20 feet to show a lot more of the ups and downs experienced on the trails through the rolling hills.

To make things even better, we used e-punching, which enabled us to optimize the courses where the trail network is most complex for the maximum number of route choices. We no longer had to use long loop trails that offered no real route choices to prevent people from punching at controls before they were supposed to punch in at them. Unfortunately, I'm still new at using the e-punch software, and we ran into a problem that took Thorsten Graeve 60-90 minutes to resolve (many thanks, Thorsten), so that we could print the results before the participants went home. 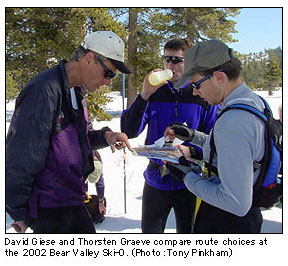 We added nine bushwhacked trails to the groomed trails at Bear Valley. These trails opened up the route choices by connecting loops and providing shortcuts that changed the character of the trail network. Where possible, we made these trails on relatively flat areas so people could pole their way along them. Unfortunately, the off-trail areas were pretty much iced up, and we had difficulty creating these trails with our skis. That meant that some of these trails were very difficult to notice. In the future, we will use some small flags that will be added to the ski-O kit. They would be perfect for this and should be our standard marker for these "official" trails.

Oddly enough, most of the people who didn't complete courses were on the Blue course. They either couldn't find or mispunched at least one control. One of them probably would have benefited from having flags placed at the start of the bushwhacked trails.

There's nothing like having a computer with OCAD and copies of the course maps that can be printed on site when the maps are needed. During the event, we ran out of Yellow maps and master maps for control pickup crews (we had lots of volunteers for this and needed lots of maps), and we were able to print everything needed. You hate to depend on that in case the computer, software, or printer go down, but it is really handy to be able to print extra maps when needed. 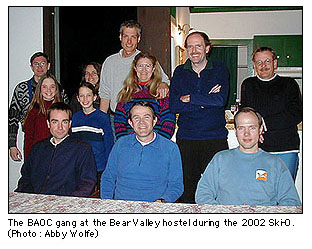 As with previous years at Bear Valley, BAOC took over the Nordic hostel across the street from the start/finish area. Once we were there, we were constantly among friends and had only to walk across the highway to go skiing. It's a great place to relax, share a bunch of meals, and occasionally work on last-minute preparations the night before the event. Those who stay at the hostel and a few others help out with the event functions, so we're never at a loss for volunteers at this event. This year was definitely no exception.

Working with me on this event was the course setter, Matthias Kohler (also the course setter for Royal Gorge a month earlier). Registration was managed by Catherine O'Sullivan, William Humnicky, Kent Ohlund, and Gerry Goss. Beginner's clinics were taught by Abby Wolfe and Matthias Kohler. Starts were handled by Werner, Tanya, and Kirstin Haag; Thorsten Graeve; Rosemary Johnson; Jay Hann; and Matthias Kohler. Results for the non-electronic punch courses were handled by Rosemary Johnson. E-punch problems were resolved by Thorsten "Troubleshooting" Graeve. Awards were made and presented (for all three ski-O events) by Brenda Giese. Control pickup was taken care of by the stalwart crew of Alex and Yelena Krasnov, David Giese, Richard Asano, Matthias Kohler, and the Haags (Werner, Tanya, and Kirstin).

Invaluable assistance was provided at all times before, during, and after the event by the Bear Valley Cross Country staff (Paul and Dianne Petersen, Jill, Buffy, Ward, and many others). A special thanks to Mike Poulsen (now with CROC) whose monumental efforts and inspiration in 1996 and 1997 made this and future Bear Valley events possible and a delight to direct.

The results are ordered by finish times, with placings given to those doing their first course. There is an advantage associated with doing a second course if the courses are in the same area, so we do not award placings to second-course participants (but we're sure to smile when we see people doing more than one course).

Be sure to check out the e-punch splits for the Orange, Green, and Blue courses, which are ordered by time only.

The results for this event determined many placings for the 2002 California Ski-O Champs.