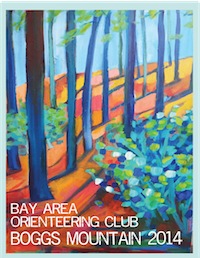 By Bill and Heidi Cusworth

The Long and Middle courses will use the eastern portion of the Boggs Mountain map. Much of this terrain has not been used for several years, so the terrain should not be too familiar to participants who ran at previous events.

The Sprint courses will take place in a small area near the campgrounds in the middle of the main map. A brand new IOF Sprint standard (ISSOM) map was made for this area by converting the symbols from the regular map to Sprint symbols. The map scale will be 1:5000 and the contour interval will be 5 meters. The contour interval is not consistent with IOF Sprint standards, but standard 2.5-meter contours were not available.

Extensive remapping was done on both the existing map and the new Sprint map from January to April, 2014 (100+ hours). For those of you who have not been on the map, hopefully you will find it consistent with IOF standards, and for those who have been on the map, you will want to note the changes to the map described below. The original map was made in 2006–2007. There have been changes to the trails and vegetation, but also a number of items were changed to improve legibility.

All the roads and trails on the map have been reclassified, and more than half were changed to a new symbol. Boggs Mtn is an actively logged area, and most of the roads and trails are remnants of old logging roads with various levels of age and distinctness in the terrain. Note that there are no paved roads on the entire map. Many of the better dirt roads were upgraded to a solid black line to help distinguish them from the rougher, narrower vehicle tracks (black dashed lines). Old roads that are clearly not being driven on anymore (many are blocked to vehicles), but are otherwise in good condition and distinct, are mapped with the large-path symbol.

Old roads that are getting overgrown and less distinct in the terrain are mapped with the narrow-ride symbol (very thin black line). Many more of these have been added to the updated map, and many roads on the old map were downgraded to this symbol. Roads that have degraded even further are shown as a thin strip of yellow clearing or less-dense forest.

The small-path symbol is reserved exclusively for single-track trails that were never an old logging road. Most of the named park trails fall into this category. On the old map, many of these were shown as large paths​—​they have been downgraded to the small-path symbol to more accurately reflect their width. What this means is that the small paths on the map are often visually more distinct than large paths, because there is an active tread on them that is not present on the old roads. We felt that width should be more of a determining factor than distinctness. There are, of course, some cases where park trails coincide with an old road grade, and these were mapped with the large-path symbol. Indistinct paths are most often animal trails.

Many changes to the vegetation were made from the old map, and most of these were related to a Manzanita-type bush that grows all over the Boggs Mtn area. The bush grows in clumps that are usually 1.5–2 meters tall. In some cases, the park has actively removed this bush, presumably as a fire control measure, so those green areas were removed from the map. In most cases, though, it has grown since the original map was made. On the old map, this bush is shown either with vertical green lines or more commonly as small, dark green circles. While this representation is fairly accurate given that it grows in distinct patches with clear running in between, it turns out to be very difficult to read at 1:15,000 or 1:10,000 scale. Consequently, these bushes were remapped as solid green areas, most often medium green (20–60% runnable), but sometimes dark green (0–20% runnable). Only in some small areas were the bushes short enough to be mapped with the vertical-green-line (undergrowth) symbol.

Boggs Mtn contains a lot of rock features, and many of these features were remapped. In areas with lots of rock features in one place, it was difficult to decide which boulders should be mapped. Consequently, most of these areas were generalized to boulder-cluster and boulder-field symbols rather than try to show individual boulders, and this improved map legibility. Many boulders (and knolls) under 1 meter tall (the IOF standard cutoff height) were present on the original map. Some were removed from the map, but some of the boulders between 0.5 and 1.0 meter tall were kept on the map because they are very distinct in the terrain. The size of the boulder symbols was increased from the original map, but is still slightly smaller than IOF standard. Any further increase in the symbol size would result in overlapping symbols in some areas.

Very little poison oak was noticed in the vicinity of any of the control locations, with the exception of the farther controls of the Long Blue course. On all the courses, however, there are some small patches of poison oak​—​these patches can easily be avoided. The usual precautions should be followed.

It appears that yellow jackets will not be a concern for the event as they have been at events in the fall.

Most of the courses will be in the general vicinity of a shooting range. All the courses keep a safe distance from the range, but you will most likely hear the gunshots while on your course. We apologize if the noise disrupts your concentration.

The Finish area, including the last control, will be exactly the same for all three days of competition. Each day, every course will start with a trivial run down a road or trail to the same first control (which must be punched). The only exception to this is the Middle White on Sunday. Details about those first legs are in the notes for each day below. The Start Triangles will be at the Start locations.

Many boulders and knolls have been used on the courses for both days, but only ones that are at least 0.5 m tall. Small clearings are another commonly used feature for controls.

The courses are set as close to the IOF standard for Sprint courses as possible, given that Boggs Mtn is a very non-ideal area for Sprint courses. There will be a lot of short legs with abrupt changes of direction, and almost all legs will feature micro route choices (such as which direction to go around a thicket) as well as more significant choices (whether to take a longer trail route vs. going straight). Some controls will seem a little too technical compared to Sprint course standards.

All the courses will start with the exact same first leg, a 90-meter run along a trail to a trail bend. There will be two E-punch units at this first control, and also at the last control, which is the same for all courses.

There is no water on the courses.

The courses are set to the IOF standard for Long courses, which emphasizes route choice and has a number of long legs.

All the courses will start with the exact same first leg, a 115-meter run along a trail to a trail junction. There will be two E-punch units at this first control, and also at the last control, which is the same for all the courses.

Since the eastern portion of the Boggs Mountain map has some big hills, there will be considerable climb on these courses (although the climb is moderate by Bay Area standards).

The Long Blue course will come close to a stream valley that is marked on the map with the words "poison oak".

The courses are set to the IOF standard for Middle courses, which emphasizes technical challenge and has a number of short- to medium-length legs.

All the courses, except White, will start with the exact same first leg, a 150-meter run along a road to a road/trail junction. There will be two E-punch units at this first control, and also at the last control, which is the same for all the courses. The White course will use the same start but will travel in a different direction to the first control.

All the courses will have some overlap of terrain with the previous day's Long courses.

Since the eastern portion of the Boggs Mountain map has some big hills, there will be considerable climb on these courses (although the climb is moderate by Bay Area standards). On the Middle courses, this climb will come mostly at the beginning of the course.