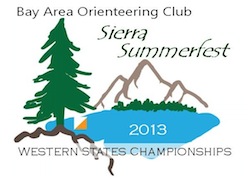 The Long courses are set in the newly-mapped terrain on the eastern portion of the Little Truckee Summit map, so there will be little overlap with the terrain visited in 2011. The terrain consists of a central nearly-dry marsh surrounded by pine forest on gently sloping hillsides. Further from the marsh, the forested hillsides become steeper. The White, Yellow, and Brown courses will be on the more gentle terrain. Orange, Green, Red, and Blue will venture into the steeper terrain. For your extra effort, you will be able to take in nice views of the surrounding Sierra Nevada Mountains. All the courses, except for White and Yellow, have an option to cross the marsh. This is possible without getting your feet wet, although as of mid June there were some muddy areas and 0.3 m wide streams.

The course statistics are as follows:

Note that there is a remote Start on Sunday for the Long courses. Be sure to allow enough time for waiting for the shuttle bus, the bus ride, and a short walk to the Start. We estimate that could take at least 30 minutes.

All of the courses, including White and Yellow, will be navigating in areas that have the remnants of logging roads. These are indicated on the map and the control descriptions as narrow rides. Depending on how recently the area was logged, the rides can vary from very distinct to much less distinct with vegetation and trees starting to re-establish on them. You will also likely encounter some rides that are even less distinct that are not mapped. Recognizing and following a ride can be a bit tricky. This is especially relevant to the White, Yellow, and Orange course participants, since you may want to navigate on these rides and there are no streamers to assist. Hopefully you will have taken note of the rides on your Saturday courses. Look for signs of crude plowing on the sides, wheel or track ruts, and fairly straight lines of trees (and skyline) on either side. They are often obstructed by transverse mounds of dirt, which represent where the plow dug in a bit deep. Rather than treating such a barrier across the "road" as an end, it is a sure sign that you are indeed on a ride, and that it continues on the other side of the dirt mound. Rides are just as likely to go straight up a hillside as follow a contour.

Note that the reentrants mapped as streams have no water running in them. In fact, some of the intermittent streams are difficult to follow since the low point can be quite shallow as indicated by the contours on the map.

The area mapped as forest (white) is quite open with good visibility. Therefore, it is often difficult to distinguish between white forest, open with scattered trees, and rough open with scattered trees. There are also quite a few mapped distinct trees with the map symbol being an open green circle. Some of these have been used as control locations. The warning is that many of these distinct trees don’t look too lonely, especially at ground level. This is partly due to the open nature of the forest, but also some green circles represent a small grouping of trees. I typically had to confirm the distinct-tree control location by using other features to make sure it is in fact the correct one. If you are in the right area, I expect that the control flag will be visible next to the distinct tree.

The terrain can be quite rocky in some areas. In general, the northeastern corner of the map, which is visited by Red and Blue, seems to me to be the rockiest and therefore slightly slower going. The map includes only the boulders that are at least 1 m high, which is important to note to use boulders as a reliable navigation aid. Some smaller boulders are mapped, but only if there are no other boulders around.