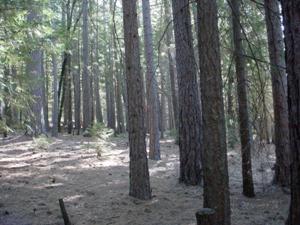 The long-distance courses are designed to test all aspects of orienteering, but especially route selection and running ability. The Boggs Mountain terrain has been described by our WRE advisor as the best approximation to continental terrain we have in North America.

The Red X, Red Y, and Blue courses will have a 1.2-km walk to the start from the assembly area. (Follow the yellow & black streamers.) The White, Yellow, Orange, Brown, and Green courses will have a brief 150-m walk to the Start. (Follow the yellow & black streamers.) The Finish will be close to the assembly area.

Some of the forest is well groomed, whereas other parts have deadfall and are slower going. The steeper parts tend to have more deadfall than the flatter areas.

The trail network is moderate. These include vehicle tracks, paths and rides. A very significant mapping note is the depiction of old, abandoned, logging roads as narrow rides. These are numerous and very important to navigation. If these abandoned logging roads do not show evidence of recent use, they are mapped with the narrow rides. Their appearance may be different than the traditional narrow ride. The runnability of most of these narrow rides is good, and they should be selected for faster running. Some of them are overgrown or rocky, but still offer equal, if not better, running than the surrounding forest. These old logging roads may be hard to discern when crossing them. Runners should note the differences between paths and narrow rides at the Model Event.

You may encounter various logging streamers, including pink, blue and white, and orange.

Most of the ground vegetation is either Manzanita bushes or Coffeeberry bushes. The dark green on the map is almost always wiry Manzanita, which is impassable. Areas of dispersed Manzanita bushes are usually depicted as green vertical lines. In these areas the bushes can be run around. Coffeeberry bushes are usually easy to run around or through, and are only depicted if they are very thick. Extensive deadfall is depicted with green vertical lines. There are some recently burned areas that have had a small effect on the vegetation. These burn areas will mostly affect the Orange course, but other courses may encounter them.

The Blue course comes within 500 meters of an informal, occasionally used firing range. Unless you are wildly off course, you will not encounter this range, although you may hear gunshots from this range. Firearms are allowed throughout the park, although seldom seen away from the firing range. We have posted notices warning the locals that we are using the park.

The Red X, Red Y, and Blue courses will have a Start triangle that is about 50 m from the START-punch/map-pick-up line. All competitors must go through this triangle. There will be pink streamers leading you there. The Start triangle will be indicated with a control marker (bag). Do not punch at the Start triangle.

For all other courses, the Start triangle is at the START-punch area.

Maps will be collected at the Finish until after the final competitor has started.

The safety bearing is South to the main Park Road 200 (dirt).

Preliminary statistics (subject to change until final printing of maps):

Orange course note: Orange control 2 is a water tank. "X" is used as the control description.