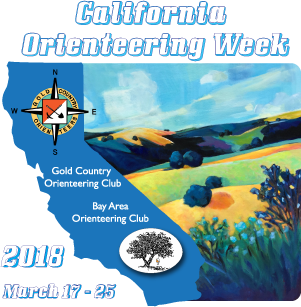 Skip to the Results

Hey diddle diddle, I can't play the fiddle, but COW jumped over the moon!

The 2018 California Orienteering Week was a smashing success. Nearly 300 different people made well over 900 starts in the seven races spread over nine days, March 17th through 25th. The competitors included many orienteering luminaries:

Terrific courses were created by the course designers (Matej Šebo, Steve Gregg, George Minarik, Matias Arola, Dwight Freund, and Bill and Heidi Cusworth) with the help of vetters and course consultants. The venues were fast and challenging, the races were hotly contested, the weather was great for running, and, yes, the hills were green, very green. Many attendees were heard to say that they'd love to come back to these venues whenever the chance arises.

The first four stages ("March Middle Madness") of COW were hosted by BAOC with Vicki Woolworth as Event Director. The last three stages, which also comprised the U.S. Junior Team Trials, were hosted by the Gold Country Orienteers (GCO) in their first-ever foray into National Events. Mats Jansson was the Event Director for those latter three stages.

The redoubtable Morgan Territory was the site for the first two stages: fast running, but only for the most agile and fittest. (Apologies to those in the oldest classes. We should have had a second, shorter Brown for them.) The event then moved to stunning Point Pinole, surrounded on three sides by water, challenging competitors to run as fast as they possibly could without making a mistake. The scenic college campuses, Mills College (for an "urban middle") and Sierra College, provided surprisingly difficult navigational challenges for the next two stages. The final two stages were held at the wonderful Deer Creek Hills, with its gentle, rolling, green hills begging for fast running tempered by constant concentration. It really was an exhilarating set of races.

A thousand points were awarded to the winner of each class each day, with everyone else getting proportionately less. One's best five scores counted for the final results. The venerable Eric Bone edged out Will Enger and Riley Culberg in M–21+, and Tori "The Quantum Flash" Borish sped away from the rest of the field in F–21+.

Greg Ahlswede and Will Enger each won two of the Blue Stages. Martin Heir topped three of the stages on Red, while David Runde and Aiden Minto each led two. Julia Doubson won three of the Green stages, and Bill Cusworth had two firsts and two seconds. Glen Tryson finished first on four of the Brown stages. Other stage winners were Siargey Pisarchyk, Eric Bone, and Riley Culberg on Blue, Siri Christopherson and Erin Schirm on Green, and Geraint Edmunds, Steve Tarry, and Dennis Wildfogel on Brown. (Yes, yes, I just had to get my name in there.) Complete results, plus splits and routes, can be found through the links below.

Of course, it took a veritable army of volunteers to make COW a success. Those who put considerable time into planning are listed here. Dozens of people contributed on the days of the events. Many, many thanks to each of you.

Thanks to BAOC From GCO

"As the event director for the 'East' edition of COW, and on behalf of Gold Country Orienteers, I would like to express our most sincere gratitude to all the people from the Bay Area Orienteering Club who came to Sierra College and Deer Creek Hills to fill all the volunteer positions that our small club could not. You have an amazing culture of 'service' which is why you are able to put on so many events. Incredible, really!

"When I grew up in Sweden, each club pretty much organized 1–2 events per year, but of course that works when there are hundreds of clubs in just a region. The number of quality events that your club puts on is mind blowing, to use the parlance of our time. Although I don't make the drive to the Bay Area often to partake, navigation sports enthusiasts with shorter drives are truly blessed to have BAOC in their community.

"We could not have done a nationally ranked event without you​—​so thanks!"

Just a few items left over from the events:

Please let know if any of these are yours, and I can send them along to the next events, or we can work out an alternative.

I will send an email to the A-meet list in the next few days, hoping most of these will be claimed locally.