Skip to the Results

The Golden Goat and Golden Kid were a great a success again this year, with over 80 participants. Martin Kunz set excellent courses on a difficult map. Congratulations to those who completed the two challenging courses. Please see Martin's detailed analysis of the results in a separate write-up below.

A number of people contributed to the success of this event: Chuck Spalding helped with postings on the Web site, Bob Cooley prepared the maps, Toby Ferguson worked the results, Galina Shakhnovsky assisted with the food, James Wilson handled the registration, Mark Blair and Jay Hann provided the equipment, and Jim Fish came early to assist with the set-up.

There were various motivations from my side to volunteer as a course setter for the 2009 Golden Goat race. First, I recognized during several training runs and also from my experience as a course setter of the B-meet in January 2008, that despite its rough cloak, Tilden offers a lot of really nice spots with nice views onto flower-covered pastures, and also onto San Francisco Bay. Secondly, I liked the challenge to set (hopefully) interesting courses on a map that, at first glance, looks unattractive and dark green. Obviously, a long-distance race like the Golden Goat allows best to make use of the hidden values that Tilden has to offer, since it allows emphasis of route choices over challenging fine navigation. And thirdly, of course, I realized during Golden Goat 2008 in Shell Ridge, that for the coming years, BAOC's Golden Goat will be and should be Jonas', and the years of me collecting 25 points for the Golden Goat lifetime list will be over—unless I resort to dubious practices such as volunteering for course setting, and by this, make use of the tradition that Golden Goat course setters garnish the maximum points from their last two participations. Obviously, this is the only way to ever get close to Steve Gregg's lead on this list.

When choosing the Start and Finish area, Marie-Josée and I were looking for a spot that allowed for an attractive mass start and a Finish passage during the race. Of course, a special course treat to mix up the race a little, in the good Golden Goat tradition, was imperative as well. After seriously considering letting half the field run the whole course in reverse direction, we settled on a two-wing butterfly shortly after the Start. This also allowed for an ideal opportunity to create a Start-Finish passage for every runner, which of course was mostly fun for us non-competitors. The other advantage of placing the butterfly in the very beginning was to have it also woven into the Golden Kid course. Due to the nature of the terrain, this year it was not possible to allow for an on-the-fly decision between Golden Kid and Golden Goat. Instead, the decision had to be made in advance. Sorry to those who missed this aspect of the Golden Goat.

The race began, despite its provocative Start location at the beginning of a racetrack-like pasture, rather calmly. I guess I should have mentioned in advance that there was only one punch unit at the first control (which I admit was not intentional, but simply a mistake on my side. Sorry!!!). Alternatively maybe one should consider two extra Golden Goat lifetime points for the first punching of the first control, to make the start look like a real running-race start.

The butterfly didn't bear much technical challenge. There were two routes from 31 to 32. The choice was either to use the road to the carousel and take the control from the top, or alternatively use the Wildcat Canyon trail and attack the control from the canyon, which is probably a bit harder fine navigation. Interestingly, in both races, Goat and Kid, the first two racers chose differently on this leg. Whereas in the Goat race Jonas Kjall was almost a minute faster on the Wildcat Canyon trail than Sergey Velichko, both 2nd and 3rd ranked in the kid race (Anders Frick and Andrejus Masalkovas) beat Kid winner Ben Legg by taking the road route. Goat female serial winner Penny DeMoss was also faster than Ben on this leg. Ben probably fell victim to the difficult-to-determine cut off from the trail, and he overran the control considerably.

In the Goat race, the longest leg offering the largest variety of route choices happened right after the butterfly. To the delight of the course setter, almost all the possible variations were taken. The fastest time was run by Jonas on a route that, with smaller variations, was taken by quite a few runners. Not surprising, it is the route right through the middle, with the shortest distance. Fourth-place Roger Michel chose a route climbing up the spur to the left, and he ran the second-best split. Considering the probably faster pace run by Jonas, one could argue that Roger's route was probably the best. The leg from control 13 to 14 (control #41 to #42) again offered a variety of route choices, which were all honored by one or the other of the lead pack. Jonas went all the way east up to the trail at the edge of the map. This route does not require significantly more climb than the alternatives, but it is more than 20% longer than the shortest one, which navigates through some narrow yellow corridor more or less along the straight line. Mikkel Conradi dared to go for this one, and was honored by the second-best split, beating Jonas by almost 3/4 of a minute. The best split was run by Sergey, who took a middle route compromising between climb and distance.

Leg 15–16 (control #43 to #44) is at first glance unassuming, but ended up with an interesting split ranking. Jonas losses ~1.5 minutes on my Primal Quest team captain Roger Pruett, both on the same route (trail up). It would have been Sergey's chance to close in on leading Jonas (who was ahead of the pack by more than 2 minutes at control 15) if he hadn't been caught in the same underbrush in front of the control as Jonas did. 16–17 again offered two distinctly different routes: left or right around the golf course (I don't want to hear from those who didn't know that lime-green on the map means out of bounds, since I don't want to hear from the golf-course operators..., sorry for forgetting to point this out during the race briefing!!). The right-hand route was clearly faster. Jonas and Mikkel beat Sergey by quite a bit, and Jonas' choice to go also right around the Botanical Garden (less climb, about same distance) would probably have paid off by another fastest split had he not dropped his compass behind the garden fence and lost several seconds to fish it out again.

The last significant decision had to be made on the leg to the last control. In the Kid race, this leg turned out to be race deciding. Jonas, who was fastest on 11 of 21 splits, lost considerable time against people running down the small yellow corridor and crossing the creek in the poison oak, by running out the small trail to the south. A surprising split best on this last leg was run by another Primal Quest fellow, Jonathan Owens, who also ran out the trail to the south, but even more extreme all the way to the Wildcat Canyon trail. In the Kid race, Anders and Ben punched only 3 seconds apart before this leg (Ben before Anders). Anders chose the route on the fire trail to the north, while Ben took the more direct route through the canyon (~30% shorter) and thus put himself 40 seconds ahead of Anders, and by this secured the Kid win.

All that was left at this point was the sprint to the Finish. As everybody knows, this is the one leg that really counts. Tellingly, the fastest split on this was taken by 50+ masters runner, and all-time Golden Goat life point leader, Steve Gregg! His time, however, was beaten by junior Philipp Kopisch in the Kid race! That Philipp's name will soon be added to the Golden Goat list is also manifested by the fact that, besides the Finish chute, he took two more splits and came in fourth in the Kid race, only 15 minutes behind elite runner Ben Legg.

Here are some photos from the event. Each photo is followed by a link to a full-size copy that you can open or download. 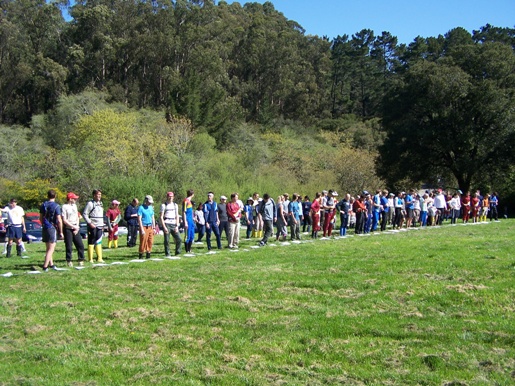 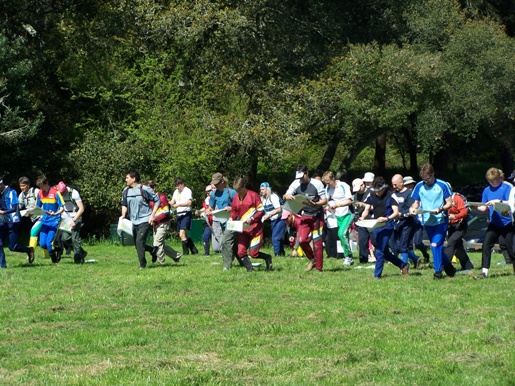 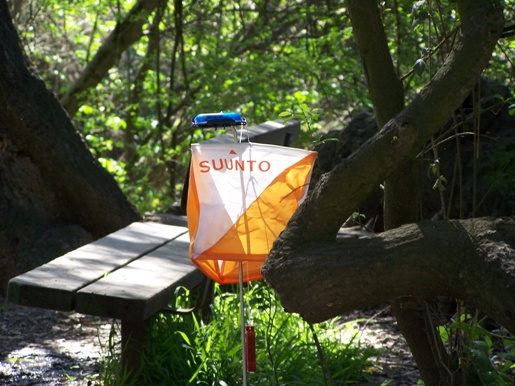 Also see control-by-control timing in the WinSplits results (http://www.obasen.nu/winsplits/online/en/show_event.asp?id=11267). You can see the event map with the actual routes traveled by participants, and draw your own route for comparison, in the RouteGadget (introduction; this event (http://baoc.org/gadget/cgi/reitti.cgi?act=map&id=170)).

The table of Golden Goat lifetime points is available here and in this PDF file (65KB).¹

The butterfly variation (A or B) on each runner's course is shown in parentheses next to his/her name.

DNF = Did not finish (missed one or more controls)


¹ PDF files can be viewed with the free Adobe Reader (http://www.adobe.com/products/acrobat/readstep2.html) program.