What is Orienteering? What about COVID-19? When are the events? How much does it cost? What should I bring? What if it rains? What types of events are there? What are the rules for orienteering? What is an A-meet? What courses and competitive classes are offered? What are Sprint, Middle, and Long courses? How do I use electronic punching (E-Punch)? What is E-punching, and how do I read the splits? What are the hazards? What is Lyme Disease? But I was taught to always stay on the trail... What do the abbreviations found in results mean? Where can I get equipment?

But I was taught to always stay on the trail...

Orienteering is a sport that deliberately takes us off trail. For many of us, raised to be conscious of causing damage with our footsteps, this is a source of puzzlement. Is it really OK to make a beeline from control to control without regard for where our feet might land?

We orienteers are aware that it is a privilege to go off trail, and a great deal of thought and preparation go into each orienteering event. We always consult with authorities, obtaining necessary permits and working together to address environmental concerns. These authorities are aware of the off-trail nature of our sport. The lands on which we conduct events are a small subset of the many spectacular landscapes around us. Many lands are eliminated from consideration due to their environmental sensitivity or protected status. If certain sections of an otherwise appropriate area are deemed sensitive, courses are arranged such that orienteers avoid these sections.

The admonition, "stay on the trail", is a simple means of preventing several problems associated with recreational trail use. The most common reasons people wish to leave the trail are to take a shortcut or to approach an attractive natural feature. But repetitive shortcutting creates erosion problems. Attractive features become less attractive when the ground around them is trampled bare. Sensitive features such as wildflower meadows are damaged by too many footsteps. The easiest way to prevent these problems is to advise people to stay on the trail.

Whereas hikers tend to go off trail in the same places repetitively, orienteers do not. An orienteering course consists of a series of checkpoints, or "controls", placed at unremarkable features such as an ordinary boulder, gully, or hilltop. Orienteers walk or run the course by navigating from control to control. Each orienteer chooses his or her own route such that no single path is trodden by all. 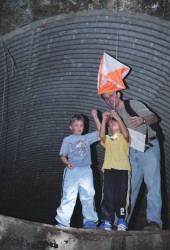 Further, we use a particular area at most twice a year. Entirely new courses are designed for each event, so there is no repetitive wear. A typical Bay Area Orienteering Club event has only 100-300 participants spread out on 7 different courses. Many participants are novices who never leave the trail. All of this adds up to very light and dispersed impact.

The heaviest off-trail disturbance is in the vicinity of the controls themselves. There, an orienteer will notice the footprints or trampled grass of those who passed by earlier. Many of us, concerned about possible damage, have given this further attention.

We have noticed that once we remove a control flag and step away, we cannot easily find those footprints and trampled grass. At times we have returned to control sites weeks later. We usually find that no sign of our passage remains. Further, we are unlikely to ever use this same spot again as a control site, so recovery is allowed to proceed to completion. In Europe, formal studies have been conducted to confirm these observations.

We find that our heaviest impact on the land takes place, not on the courses, but at the places where we park, register, start and finish. Here, we take care in the same way that organizers of any event must take care. It is worth noting that the largest environmental impact of all probably comes from the burning of gasoline in driving to and from events.

We who are drawn to orienteering are, for the most part, responsible and environmentally aware. Indeed, there are many ways in which orienteering benefits the environment. Because we traverse areas that are seldom visited even by rangers, we observe and report on things of concern. We often pick up litter left behind by others. Land managers have commented favorably on the way we conduct our events.

Most significantly, orienteering places us in the thick of nature with an intimacy that is rarely experienced from the trail, engendering a deep appreciation of nature that inspires us to protect it further.

Orienteering is truly a sport that touches the earth lightly.

The Spring (No. 1) 2000 issue of Orienteering World was devoted to environmental topics. One article, "An Environmentally-Sensitive Sport", reviews and references three scientific reports on the environmental impact of orienteering:

The IOF has a webpage (http://orienteering.sport/iof/environment-and-sustainability/) devoted to Environment and Sustainability.